Regression testing is undeniably important in software testing. We need to regress the software product as and when,  we add new feature to our software product or modify our existing software feature or after bug fixes or enhancement user story.

I recollect from my initial days, we execute around 400-500 test cases during our regression test cycle. Regression cycles were lengthy and exhaustive and testers tended to lose focus.
Regression testing is always an integral part of any software development life cycle whether it is Waterfall, ADHOC, V model or Agile. By doing a Regression testing, we are confident over the software product quality.

If we plan, design and strategies our testing well before, we can definitely achieve less painful and better coverage in regression testing during sprints as well as in final release. 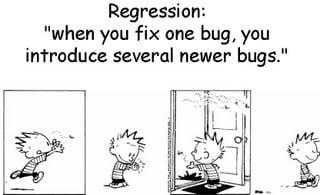 We can perform regression testing by selecting correct test cases. This can be achieved by understanding impacted modules, understanding priority of the test cases and grasp of impact prone modules.

As a manifesto of Agile development, continuous communication is the key.

*Previous experiences- That means vulnerable modules breaking frequently or getting impacted by updating in SQL procedures or updating table views or code changes.

An agile methodology has the incremental, iterative nature of the software development process that requires a huge amount of effort spent on regression testing every iteration, as new features and stories are added to the system much more quickly.

Sanity testing is performed to test the core behaviour of the application. It normally includes a set of  core tests of basic GUI functionality to demonstrate the connectivity to the database, or application server or external application, third party APIs, Printers etc

Retesting is rerunning all the test cases/scripts.

Regression testing has an important role in Agile development. In addition to its usual purpose of providing stability, it helps the team focus on the functionality in the current sprint.

Attempting to execute functional tests and regression tests together on each user story, bug fixes will reduce the load in the regression cycle performed at the end of release.

It will also help in finding the regression bugs in same user story which is implemented in that sprint. Thus, bug slippage will reduce and eventually cost will be reduced.

These are some strategies, test designs and planning helps test team in performing regression in sprint.

Heartfelt thanks to my teammates and my managers for giving me exposure, inspiring to do better testing.

Processing…
Success! You're on the list.
Whoops! There was an error and we couldn't process your subscription. Please reload the page and try again.

This author does not have any more posts.